But enough… about me!

I was the kid that used to practice singing to tapes in my bedroom. All. Day.

I was the kid that practiced preaching after I was done singing. My poor younger sister. And God bless my mother. 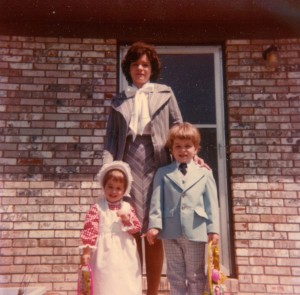 But, I was annoying and defiant and I spent a LOT of time by myself. Oddly enough though, people were constantly putting me up front. I BELONGED in front of people, they said. So, as soon as I was done with high school in my tiny Northwest Georgia town, I embarked on my degree in musical theatre at the then named Northeast Louisiana University. I had a really great time but somewhere in my second year, I got noticed by an agent in Atlanta and I got a line in a McDonald’s commercial! I said, “I’ll take the 2 for 2 double cheeseburgers!” and I got paid over $30,000 in the next few months.

DONE WITH COLLEGE! I figured if I can make that kind of money, why bother? I moved to Los Angeles where I soon realized that making that kind of money didn’t happen everyday. But, I did some feature films (X Files) and some more commercials (Circuit City – they’re not in business anymore are they?) and some TV (The Jamie Foxx Show) so it wasn’t all bad – just mostly bad. For my soul. I was crumpling inside. Then! I met my wife! Crazy story that I will tell you someday. Anyway, suffice it to say, she saved my life. Not exaggerating.

I left Los Angeles, went to get a degree in something NOT in front of people; exercise physiology. I started working with special needs folks and we started a family. Then we ran out of money. For real. We started looking nationWIDE for any place cheaper to live. Montana looked REALLY good – so we did it. I worked in gyms but then got an offer to work in cardiac rehabilitation as an exercise physiologist (I know. I have to spell check it.) for Billings Clinic. And guess what they did? That’s right. They put me in front. But this time, it was different. It was for a CAUSE – caring for sick and defenseless people, the underserved, the underprivileged. And inspiring those that helped that work. Whether it was the business office, the call center or the nurses, they liked what I had to say.

So, I got up front and went back to school here to become an RN (crazy story I will tell you someday over a protein shake) so I could fit in better! No. Because I love it. And I do. Love it. And now, people call me out of the blue to come speak for their conference or sing for their wedding or consult with them about how to have better customer (or patient) satisfaction scores or morale or… you name it. And I love it. So, here I am, in my early forties, just figuring out how all that preaching and singing to little empty plastic chairs could have maybe meant something important: I am meant to be in front of people – for a cause.

Maybe that’s YOUR cause.